This program enacts the two-part compositional history of the Diabelli Variations through the use of two different instruments. As Cheryl Tan chronicles in greater detail below, Beethoven drafted roughly 22 variations shortly after receiving his Broadwood piano from London in 1818, before leaving the project aside to focus on the last three sonatas (and the Missa Solemnis). In late 1822, Beethoven returned to the Diabelli project, revising the earlier variations and adding eleven new ones to form the opus that we know today.

By presenting the earlier variations on a Viennese piano (CCHK’s ca. 1825 Regier-Graf) and the later variations on a Broadwood from a similar era (CCHK’s 1799 Broadwood, gift of Nancy Garrett), this “composite” performance imagines a more matured engagement with the sound world of the Broadwood piano after composing the last three sonatas on the instrument. 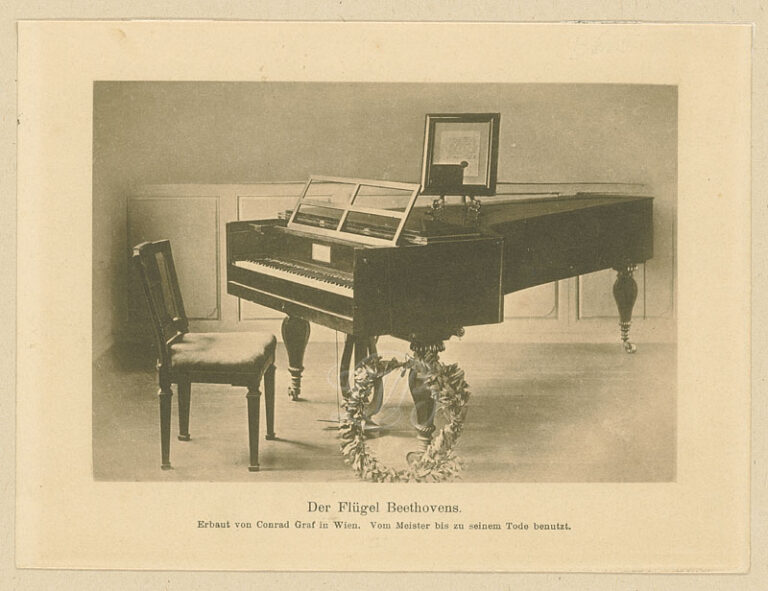 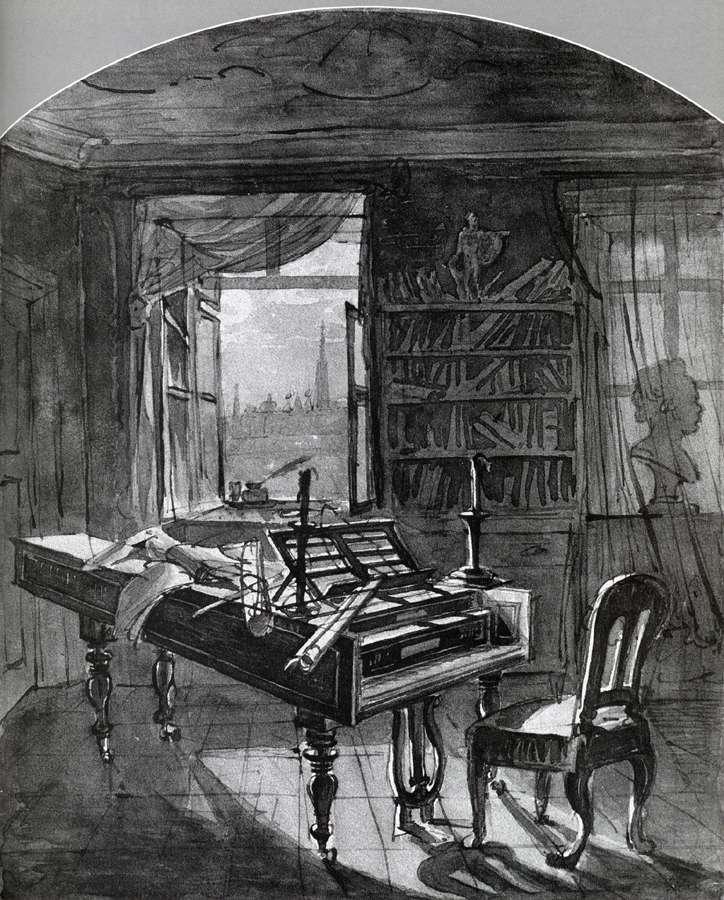 [7] Robin Wallace, “The Deaf Composer and His Broadwood: A Working Relationship,” in Beethoven and Beghin. Inside the Hearing Machine, 17.

[8] Wallace, “The Deaf Composer and His Broadwood: A Working Relationship,” 17.

[10] Beghin and Wallace, Inside the Hearing Machine.

In early 1819, music publisher and composer Anton Diabelli sent out a waltz that he had composed to fifty composers from the Austrian Empire, requesting each to contribute a variation to be published in the Vaterländischer Künstlerverein. Diabelli’s 32-measure theme was initially dismissed as being a Schusterfleck (“cobbler’s patch”) by Beethoven, who nevertheless unravelled the myriad of possibilities presented in the rustic vitality and clear-cut motives of this theme. In 1824, Beethoven contributed a set of 33 variations to this collaborative musical anthology which would—on its publication—be hailed by Diabelli as “a great and important masterpiece worthy to be ranked with the imperishable creations of the Classics,” and held up to J. S. Bach’s monumental contribution to the genre, the Goldberg [1].

In his examination of the Wittgenstein sketchbooks and reconstruction of sources from Paris, Berlin, and Montauban, William Kinderman reveals that Beethoven had composed over two-thirds of the variations—22 of the 33—upon receipt of this theme in 1819. He abandoned the project for several years—during which he worked on his last three piano sonatas, Opp. 109, 110, and 111, as well as the Missa Solemnis, Op. 123—before returning to the Diabelli variations in late 1823. On this return, Beethoven largely maintained the order that was presented in the Pairs-Landsberg-Montauban draft. Kinderman perceives the achronological interspersing of the later 11 variations (1, 2, 15, 23–26, 28–29, 31, and 33) as not only structurally significant, but also as making parodic and referential gestures to works by his predecessors and contemporaries, as well as his own. In recollecting the theme at its original register in these additional variations, sonority is used to provide pillars to the lengthy work, functioning as a significant thematic parameter.

Of these 33 variations, all but the penultimate Handelian Fugue (Var. 32) retain the tonal center of C, with Variations 9 (Allegro pesante e risoluto), 29 (Adagio ma non troppo), 30 (Andante, sempre cantabile), and 31 (Largo, molto espressivo) adopting the minor; the final of this set of three successive minor variations turns to its relative major, E♭ major, in its latter section, preparing the harmonic space for the arrival of the Handelian Fugue. Aligned with the formal aesthetic of Beethoven’s late works, the Diabelli Variations no longer primes itself on conventions of symmetry, but rather, unfolds teleologically; the centre of gravity is situated at the end of the work—evidenced particularly through the last nine variations—whose unfolding embodies an ongoing progression over the 33 variations.

The work can be interpreted as comprising three larger sections: the first comprises Variations 1–10; the second, 11–24; and the final, 25–33. The variations in the first section never deviate far from the basic parameters of the theme, but experience gradually increasing freedom. This initial section begins with a character piece—a pompous, stilted march (Alla marcia maestoso) characterised by undertones of heroic irony. Moving through the variations, the music undergoes a progressive build-up in tempo and intensity, achieving new heights of dramatic intensity in the minore variation (Var. 9, Allegro pesante e risoluto), and culminating in the swift, brilliant sempre staccato ma leggieremente of Variation 10, whose defining features include sforzandi and trills in a low register. The brilliance of Variation 10 remains unsurpassed in this entire set, and the entire first section builds up to the final fortissimo ending this variation—and the section—which spans the entire six-octave range of Beethoven’s Broadwood.

By contrast, the middle section begins with a hushed piano sempre semplice e tranquillo. The juxtaposition that had linked the end of the first section and beginning of the middle section can be extended to successive variations. Variation 14 (grave e maestoso) carries with it a new Affekt, being the first slow variation in the set. At a slower tempo and through its metrical expansion, the shape of the theme is ballooned, and the variation exudes an unprecedented spaciousness. That it is followed immediately by a Presto scherzando—which not only compresses the prevailing expansiveness to a 2/4 meter, but also constitutes the shortest of all variations—presents a stark contrast aurally and temporally, and marks its structural significance at the midpoint of this set of variations. Similarly, Variation 19’s moto perpetuo figuration in Presto is followed immediately by the Andante of Variation 20; the “still centre of the work,” in which the citadel of “inner peace” has been attained [2], is immediately shattered by a grotesque parody of the initial waltz theme in the following Allegro con brio in Variation 21, bringing the cycle back to its comic origins. Within itself, the variation features juxtapositions of registral and structural contrasts, most noticeably through the interpolation of a Meno allegro section.

Radical contrasts in texture, register, tempo, and meter between—and within—variations form a hallmark of this middle section (Variations 11–24), which also makes several other parodic references. Variation 22 (Allegro molto), set in unison octaves, references Leporello’s aria “Notte e giorno faticar” from Mozart’s Don Giovanni—setting aside Beethoven’s initial ambivalence towards the work, this reference points toward the entire cycle of variations as a kind of grand comedy. The following Variation 23 (Allegro assai) parodies the idiom of an etude; in this, an association with the etudes of Johann Baptist Cramer can be drawn, as musical expression becomes subservient to technical dexterity. This section ends on an Andante fughetta; marked una corde and sempre ligata, the contrapuntal writing in this variation adopts a musical language akin to the final fugal movement of Beethoven’s Op. 110 (1821), composed prior to this variation. Its archaic references leave it estranged from its neighbouring variations, and remove it momentarily from the larger temporal framework.

Variation 25 recounts the waltz theme for the last time; with “naïve simplicity,” its last appearance here as a distorted German dance provides a point of departure for the final section of the work, which coheres in its culmination towards an eventual teleological goal [3]. Its evolutionary progression can be traced through the successive variations; Variations 25 to 28 evolve rhythmically through reference to classical style diminution, and the first of three successive minor-key variations (Var. 29 in Adagio ma non troppo) presents the first transformation of the theme’s proportions. The second—Var. 30, the original minor key variation in the 1819 draft—is marked sempre cantabile, una corde, sempre ligato, building towards the Largo, molto espressivo of Var. 31 with prominent chromaticism and polyphonic textures.

The arrival onto what Kinderman terms the “Great Largo” is met with an aria-like figuration—with an intricately ornamented melody—that pays homage to J. S. Bach, with particular reference to Var. 25 of the Goldberg. The harmonic preparation in the latter half of this variation leads seamlessly into the final fugue (Var. 32), whose cadenza-like passage in fortissimo links to the Finale and Coda (Var. 33). The Tempo di Minuetto Moderato of the Finale reinstates the tonal center of C, and marks a “final spiritualized reminiscence of Diabelli’s country dance as Minuet”; its Coda remains “explicitly indebted” to Beethoven’s last piano sonata Op. 111, with its Arietta forming its main subject [4]. For Kinderman, this work traces the path from the banality of Diabelli’s “ditty” to the sublime world of the Arietta from Op. 111 in a manner that embodies—at a crucial stage of Beethoven’s hearing loss—a transformation of his musical language that expanded his expressive possibilities, which maintains, still, the grace of Mozartean minuets [5].

The insertion of these later variations mark a more matured form of engagement with the sound world of his Broadwood, which was “handpicked in a prestigious London showroom on Great Pulteney Street by a committee of five highly ranked London musicians,” and delivered to Beethoven in the spring of 1818 [6]. The distinctive textures of these later variations attributes not only to Beethoven’s experiences of composing the last three piano sonatas in the interceding years, but possibly to the incorporation of a “hearing machine” onto the English piano in 1820 as well, whose responsive frame functioned as an echo chamber in which Beethoven’s experience could be intensified, amplified, and received [7].

With this “hearing machine,” Tom Beghin draws a parallel between the amplified “Broadwood-cum-cupola” and the Viennese prell-action of the clavichord that Beethoven had grown up playing; where tactility was derived from the direct contact with the struck string on a clavichord, a similar illusion of direct tactile contact with the piano strings could be achieved through the after touch of his Broadwood. Beghin and Wallace contend, therefore, that touch became Beethoven’s primary vehicle for interacting with the instrument, compensating for his hearing loss, allowing him to attune to the instrument more directly [8].

The range of Op. 120 is aligned with the range offered by Beethoven’s six-octave Broadwood—CC to c4—whose highest note was a fourth below that of his six-octave Viennese piano [9]. That Beethoven frequently called on Viennese builders—Wilhelm Leschen, Andre Stein, and Conrad Graf—to assist in the upkeep of his Broadwood attests to the importance of this instrument [10]. Beyond its significance to the Diabelli, the range employed in his late pianistic oeuvre—from the fugal finale of Op. 106 to the last of his piano compositions—speaks to the significance of the Broadwood aesthetic as a central aspect of expression and expressivity in Beethoven’s later music.