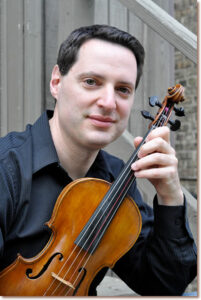 Violinist Martin Davids founded and directs the Callipygian Players, Chicago’s premier Baroque chamber music ensemble. “A devoted Baroque artist and performer of considerable note” (Jack Neal, KUNR-FM), Mr. Davids is concertmaster of Brandywine Baroque (DE), Third Coast Baroque, Bella Voce Sinfonia, and Bach Collegium of Ft. Wayne. He is principal second violin with the Haymarket Opera Company, and Baroque Chamber Orchestra of Colorado. In Chicago, he also plays with Music of the Baroque and Ars Antigua. In the summer, he performs at the Staunton Music Festival (VA). Other ensembles he has played with include Bach Collegium San Diego, Indianapolis Baroque Orchestra, Ensemble Galilei, Chicago Opera Theater, Central City Opera, Aradia, Toronto Consort, and numerous others across Canada and the U.S. Mr. Davids earned the prestigious Performer Diploma in Baroque violin from Indiana University where he studied with Stanley Ritchie. He also received a Masters degree from the University of Michigan. Mr. Davids published a volume of arrangements for two violins of J. S. Bach’s solo violin fugues in early 2016. Called Bachfor2, it is the first arrangement of its kind. A second volume was published in 2019. His arrangements of French harpsichord solos for violin and viola duet were published in late 2020, as was his chaconne for solo viola. He is a third generation disciple of the YiZung Yue school of internal martial arts. He also hosts the “Classical Happy Hour” podcast. “The ever-impressive Martin Davids” (Opera News) has recorded on the Musica Omnia, Albany, Plectra, Cedille, and Sonabilis labels. In January of 2017, he celebrated the release of his latest CD Les Deux suites de airs d’opera… with concerts in Paris and Naples. His recent CD, Michael Christian Festing, Violin Sonatas, which “…revels in the sound of his instrument, with assured and very articulate bowing [and] masterful phrasing…” (classicstoday.com, 2015), came out in December, 2014. Also recently released, his world premier 12 Sonatas for Violin and Continuo by Henry Eccles both performance and recording are uniformly excellent” (Early Music America, Spring, 2014) — is available. Mr. Davids often gives masterclasses in performance practice and improvisation at many schools and universities. He performs on a Baroque violin by Ferdinando Alberti from 1750 with Baroque bows by Canadian master bow makers Michelle Speller and Stephen Marvin. A resident of Skokie, IL, he lives with his wife Julia, and children Judith and Solomon. 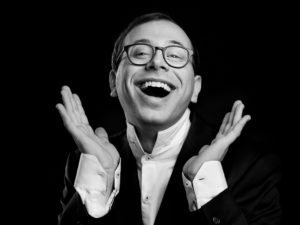 A professional organist, harpsichordist and fortepianist with international recognition as an improviser and composer, Nathan Mondry is a first-year D.M.A. student in the Keyboard Studies program at Cornell University. After completing a Bachelor’s Degree in Piano Performance at the University of Michigan, Nathan earned a Master’s Degree in Harpsichord Performance and an Artist Diploma in Organ Performance at McGill University, followed by a Master’s Degree in Historical Improvisation at the Schola Cantorum Basiliensis in Switzerland. Nathan is the recipient of numerous prizes, including a Special Prize at the First International Competition for Basso Continuo and Partimento Realization at Katowice (2019), a First Prize (with Arnie Tanimoto) at the Bach-Abel Competition (2018), and a prize for composition at the International Competition for Organ Composition in Pordenone (2019).

As a rising improvisation specialist, he covers a range of styles from as early as the 15th and 16th centuries to the present day; collaborations include with La Cetra Barockorchester (2018) and a silent film accompaniment concert sponsored by the Birds Eye Jazz Club Basel (2019). Furthermore, he has been commissioned to reconstruct and compose original works for various musicians and organizations, including the Projet Myrelingues of the Association Ephémère classique in France, Les Idées heureuses in Montreal, and historical bassoonist Andrew Burn in Basel. Nathan is also an active chamber musician; his group Les Barocudas, based in Montreal, released an album last year, La Peste, which was nominated for a Juno Award. 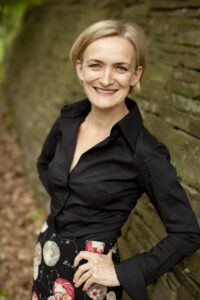 Annette Richards is a performer, scholar, and teacher specializing in the music and culture of the long 18th century. She has won numerous honors, including prizes at international organ competitions (Dublin, Bruges) and fellowships at the Stanford Humanities Center, the Getty Center in Santa Monica and from the Andrew W. Mellon Foundation and the Alexander von Humboldt Foundation. For ten years she was the Executive Director of the Westfield Center for Historical Keyboard Studies, bringing the Center to Cornell under the auspices of a generous grant from the Andrew W. Mellon Foundation, and she is also the founding director of the Cornell Center for Historical Keyboards. She is founding editor of Keyboard Perspectives, a yearbook dedicated to historical performance and keyboard culture, but her scholarly work extends far beyond keyboards and their music. Topics she has published on include the free fantasia and landscape theory, C. P. E. Bach, Handel and charity, Mozart and mechanical music, Haydn and the grotesque, the glass harmonica and ghost music. Her new monograph, The Temple of Fame and Friendship: Portraits, Music and History in the C. P. E. Bach Circle will be published by the University of Chicago Press in February, 2022. Annette has recorded the Complete Works of Melchior Schildt (on the Loft label) on the historic organ at Roskilde Cathedral, Denmark, and music from the library of Princess Anna Amalia of Prussia on the Arp Schnitger-style organ at Cornell University. She is currently preparing a recording of Italian and English music on Cornell’s 18th-century Neapolitan organ, and, with David Yearsley, a set of recordings of 18th-century music for multiple keyboards, with readings from the travel diaries of Charles Burney. Annette Richards is the Given Foundation Professor of the Humanities and University Organist at Cornell University. She currently serves, as well, as the Associate Director of the Society for the Humanities at Cornell.

Organist and harpsichordist Jonathan Schakel earned a doctoral degree in performance practice at Cornell University, where he studied with Annette Richards and David Yearsley.  He holds a master’s degree in organ and early music from Longy School of Music in Cambridge, MA, where he studied organ and harpsichord with Peter Sykes and continuo with Frances Conover Fitch.  He has pursued additional studies with Lorenzo Ghielmi, Luigi Ferdinando Tagliavini, and Olivier Latry, and has participated in the summer organ academies in Smarano, Italy; in Haarlem, the Netherlands; and at McGill University in Montreal.  Jonathan has given organ recitals in the Netherlands, Germany, Scotland, and many of the United States, including performances at the Piccolo Spoleto Festival in Charleston, SC; Harvard University; Princeton University; Trinity Church, Boston; St Giles’ Cathedral, Edinburgh; the Ludgerikirche, Norden, Germany; and de Engelse Kerk, Amsterdam.  His editions of Renaissance vocal music have been performed in the US, England, and Germany, and he serves as artistic director for the early music vocal ensemble Zephyrus.  He is currently organist at Westminster Presbyterian Church in Charlottesville, Virginia. 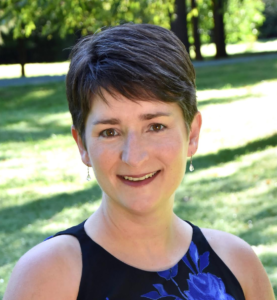 Megan Sharp earned her undergraduate degree in music from the College of Wooster in Ohio and holds a master’s degree in opera from the Boston Conservatory.  Following graduation and a period of intense study of Baroque singing with Sally Sanford, Baroque dance with Ken Pierce, and French art song with Carole Bajac, her career has focused on performing, especially early music, and increasingly on choral conducting.  She has sung with the Boston Early Music Festival, the Connecticut Early Music Festival, Ensemble Chanterelle, the Schola Cantorum, and Longwood Opera.  Ms. Sharp often collaborates with organist and harpsichordist Jonathan Schakel, including concerts in Germany, the Netherlands, Boston, Michigan, North Carolina, and Virginia.  In 2011 Ms. Sharp was named music director of the Charlottesville-based vocal ensemble Zephyrus.  She has led Zephyrus in summer residencies at St. Mary’s Cathedral, Edinburgh; Trinity Cathedral in Dublin; and Christ Church Cathedral, Oxford.  Ms. Sharp has directed choirs in churches and schools for over 20 years, and currently serves as director of fine arts at Westminster Presbyterian Church in Charlottesville.  In addition, she maintains a private voice studio and teaches T’ai Chi at the Charlottesville T’ai Chi Center. 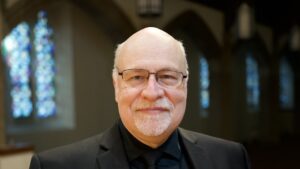 Jeffrey Snedeker ’78 has studied with Donald Paterson, Robert Parkins, Randall Harlow and Annette Richards, and performs frequently in Ithaca and Upstate NY.  He has served as organist and choir director for churches in Madison WI, Houston TX and Durham NC.  He is a member of the Schola Cantorum of Syracuse, a former member of the Duke Collegium Musicum and the Taurus Ensemble, and recently performed in the Boston Early Music Festival Fringe. 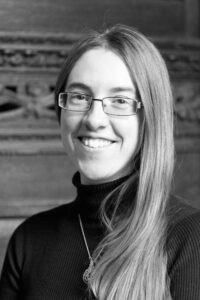 Anna Steppler is an organist and PhD Candidate in the department of music at Cornell. Originally from London, U.K., she read Music at Merton College, Oxford, where she was organ scholar from 2010-2013. Following this she pursued a Masters degree on the Organ at the University of Gothenburg, Sweden, where she studied the organ with Hans Fagius and the clavichord with Joel Speerstra, and was awarded the Carl Larsson Scholarship for Music. As a performer and scholar she is always interested to explore unusual, perhaps unexpected, corners of the organist’s repertoire in her recitals, ranging from the earliest keyboard music to the occasional 21st century foray. With a particular interest in the sixteenth and seventeenth century as both a scholar and performer, her dissertation, “Michael Praetorius, the Organ, and the Possibilities of Instrumental Music” explores the organ and its music c. 1600 in courtly Lutheran circles. 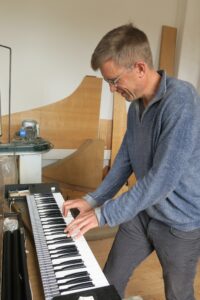 David Yearsley has been music critic at The Anderson Valley Advertiser, since 1990, and is the author most recently of Sex, Death and Minuets: Anna Magdalena Bach and Her Musical Notebooks. He writes a column every Friday on music and politics for CounterPunch, and has made many recordings on historic keyboard instruments, from ancient organs to vintage Moog synthesizers. He lives in Ithaca, New York where he teaches at Cornell University.