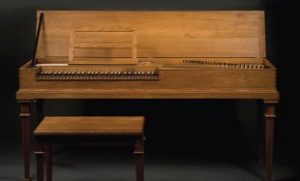 Christian Ernst Friederici apprenticed with Gottfried Silbermann, whose pioneering instruments established a distinctive Saxon school of keyed instrument building. Carl Philipp Emanuel Bach’s esteem for his Silbermann clavichord is well known from his Abschied von meinem Silbermannischen Claviere (1781); this was the instrument that Charles Burney heard Bach improvise upon when Burney visited Hamburg in 1773. At the time of his death, Bach owned a Friederici clavichord andone by the Gotha builder Heinrich Wilhelm Jungcurth. The Friederici clavichord is very likely to have been a five-octave, unfretted instrument on the same plan as the 1765 instrument in the Leipzig Museum für Musikinstrumente, which was the model for thiscopy by Dietrich Hein.In Hamburg Bach heard and played the clavichords from the workshops of renowned local builders Barthold Fritz and Johann Adolph Hass, but he always preferred the instruments of his native Saxony. Saxon clavichords are heavily builtand have soundboard roses, and so are both louder and have a wider dynamic range than their Hamburg cousins. To compensate for the thin tone of the bass register, Hamburg clavichords were supplied with octave strings (a second course tuned an octave higher, as on a lute or twelve-string guitar). Bach was unequivocal in his dislike of this design: “I greatly prefer Friederici clavichords to those of Fritz and Hass because of their construction and the absence of octave strings in the bass, a thing I cannot bear.”